We are currently at Bocas Del Toro, on the Carribean side of Panama.   I’m checking off two Bucket List items: Renting an ATV for a challenging jungle trail off the beaten path and then snorkeling.

We are killing time until our niece and her husband arrive on the 3rd of March, so I decided to put the time to good use.  We had not been to the beach, mostly ignored because we had seen the hot weather in David and wanted to avoid that.  But we decided, hot or not, we were probably missing out.  First, we booked on-line into Las Lajas Beach Resort about 50 miles east of David (It’s East but it feels like it should be South because at home all beaches run North and South and the sun comes up in the East and set in the West — not here).  After taking our favorite neighbor Mario to the airport on Tuesday two weeks ago, we just struck out for an exploratory drive down that direction.  About 30 miles down we took a side road that looked interesting.  We stumbled on the Bocas Del Mar Beach Resort that turned out to be an incredibly beautiful and upscale location nestled in a bunch of Islands and in protected waters.  Over lunch and cocktails, and cool ocean breezes, it didn’t take long to figure out we would like to stay here a few days.  After returning to Volcan for the night, we did the Las Lajas resort that next night.  It was really nice with cool sea breezes and miles of near-deserted broad sandy beaches. The next night we were into the Bocas Del Mar for two nights.  It was an entirely different area.  Deeper quiet water and beautiful islands nearby all around us. 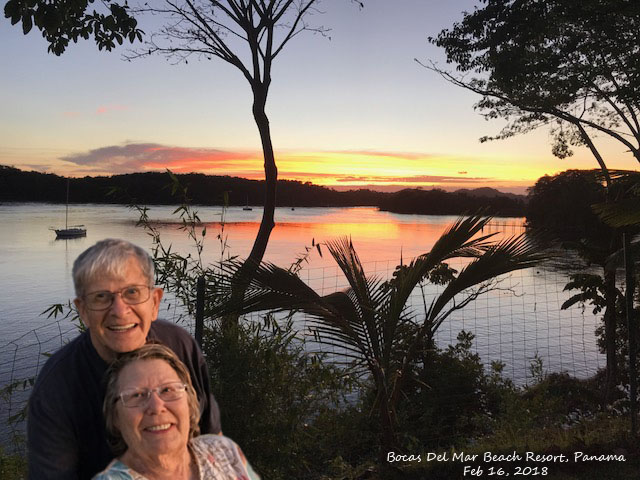 Somebody we ran into said, “What are you coming way down here for when you have a couple of great beaches right where you’re at.”  We had not heard about them so that’s where decided to go next.  We booked the Las Olas Resort West of David for two nights.  I was a big hotel but the staff wasn’t too friendly so we left after one night.  Then, the next week, we are booked into Bocas del Toro area which is over on the Caribbean side (About a 4-hr drive).  We had heard a lot of good things about it there, and I thought we would probably stay there a week or so.  We’d heard it is apparently very popular and there are tons of hotels and beach properties.  I have wanted to go snorkeling and they say it’s great to do there. So, now we are in Boca del Toro, and we are enjoying it immensely.

However, we receive our meds in weekly pre-dose Bubble Packs from Hilltop Pharmacy in Mount Vernon.   When we left Volcan, I packed two but then found they were both for me.  We had to turn around and go back the next morning.   It’s about 36 miles as the crow flies but 140 miles by road.  Hate to do that but had no choice.  We had seen enough in the one day that we wanted to stay here at least a week so back we go and drove back again the next day.

Interestingly, we take a covered water taxi from the mainland.   It’s a neat little town with apparently literally thousands of visitors from all over the world.  Most of the people we see on the street are non-Panamanians.  Lots of English spoken in restaurants and hotels.  Its an exciting place and we wanted to have more of it.   The firsts night in, we found a highly rated restaurant on Trip Advisor listed as 2 1/2 miles away.  The taxi ride was torturous. The road was FAR worse than the road to our place in Volcan.  It was a one lane dirt path that followed the beach and in places, we were driving through the surf.  Incredible.  Sand and rocks for a ride you wouldn’t believe, but the restaurant was great.

We’ve never done anything like this before, and it’s been a great place to come for a week or even two weeks.  Weather is great, and the little town is devoted to tourists.   Today I am renting an ATV and we will putts carefully out the length of the road and back.  Tomorrow, I have reserved a day-trip on a catamaran.  I will get to go snorkeling and Sue is along for the ride.  Hotel is great and the best bed we have had on the entire trip.

We have met a number of neat couples to play around with.  After four months in Panama, this is certainly a high point.   I’d consider coming back here but not elsewhere in Panama — certainly would not come to Panama to retire, but a lot of people do. Hear stories and have seen directly, people selling everything and moving here, they become disenchanted.

Our third day was an ATV.  I took Sue for a ride along the beach road as far as the pavement went where we found a neat Pirate’s Cove bar for lunch and cocktails (Scully’s – shown below).  Then took her back for a nap and I went out for a very long and taxing jungle road trip that got pretty hairy.    I went about 10 to 15 kilometers until the trail finally become totally impassible.  Quite an adventure.

With another couple we did this beach bar last night, The pictures shown here on TripAdvisor do a good job of depicting the feel and atmosphere of the place and this whole Bocas Del Toro area: